We're not the worst!

We're not the worst! AWESOME!!

OMG! I've been sooo busy this week. We got back from Kelowna at 7:30am on Monday morning, I crawled off the bus and managed to make it to work by 8:30am the same day. Tuesday, Wednesday and Thursday, I got to indulge in some sweet instructor eye-candy whilst learning about effective communication and the power of optimism. It's now friday and I'm back at work trying to do a whole week's worth in one day. Needless to say, I'm going to be here for a while.

Kelowna was fun! Except for the bus. Buses are never fun but they are way less fun when your driver is a complete freak. Not only did his excellent driving skills cause me to launch outta my seat on MULTIPLE occasions... he seemed to have some serious "issues" and needed to stop and use the washroom every 45 minutes or so. Sometimes, he'd just pull the bus over on the side of the highway and use the bus bathroom. COME ON! It's the middle of the night and I really want to yell "PLUG YOUR DAMN ASSHOLE AND STOP JERKING ME AROUND - I'M TRYING TO SLEEP" The poor girls at the back of the bus.

Competition went great, we skated super well. We can't really compare to the big teams that do Synchro full time but we managed to beat a team from Victoria to come in 4th so we were stoked!! We weren't the worst. :)

We skate to a Lion King theme... 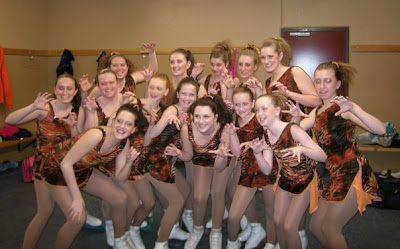 That's some great hair - am I right??

I picked up soooo many jewels from the courses I took over the last 3 days and I'm certainly going to share, but right now I need to get back to work.

So much cooler online

Sooo online dating in Dawson Creek is not so hot. I got a few emails but nothing local and nothing that made me want to arrange a face to face.

Here is my list of deal breakers
1) Profile pictures containing dead animals
2) Any reference what so ever to "hooking up" (Dude, we've never met and I ain't that hard up... even if you are)
3) Do not set yourself up for a joke and then get offended when I crack the obvious cause you basically asked for it. (I like to crack jokes at the expense of others - can't deal, go elsewhere)
4) Do you have kids: Prefer not to say... Uhmm either you have kids or you don't and if you didn't you'd just say no. So why not say yes? Are you ashamed of your children... AWESOME - that's the kind of guy every girl wants to date.
4) Finally... (this isn't really a deal breaker but certainly astonishing) Hasn't ANYONE in this part of the country seen Flight of the Conchords? Isn't it time you came out of the bush and said hello to reality??!!

Seriously. I think there were a total of 6 guys from here in my age range with about 25% of them worth talking to. Lots of guys in neighboring towns so I might try again in the summertime when travel is possible.

I'm off to Kelowna this weekend for a skating competition! Should be fun!
Posted by Kat at 2:41 PM 1 comment:

Since when are headless bloody animals a turn on? 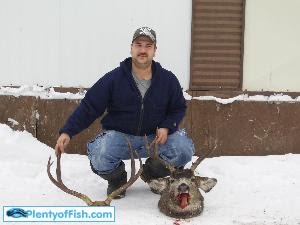 Just one of many and I mean many.

I was thinking maybe I could get some feedback. Below is what I have for the "about me" in my online dating profile. Should I be more specific and more creative? My theory is that guys don't really read, they just look at the pictures and decide whether or not to contact you from that...

Hey there! I'm an outgoing girl who's sweet and fun and always up for an adventure. I love live music and plan on spending the majority of my vacation time this year attending music festivals - I'm most excited about Bonnaroo!

I'm active, I hate sitting at home, I'd much rather be out socializing and doing things. I love to skate and do so on a synchro team

Oh and I'm always looking for the humor in life, I love to laugh so I have one question... Are you a hiphopopotamus or a rhymenoceros?

Any feedback would be helpful, I'm sure!
Posted by Kat at 6:00 PM 3 comments:

So here's a real knee slapper... Thanks to some prompting from the girls at work, I've decided to check out the world of internet dating.

(After all, being almost 30 and unmarried in this town means I must be in desperate need of a dude - right?)

I know LOTS of people do it and its become a pretty popular way of meeting new people - especially over the last couple of years. I, however, am not a good candidate for internet dating. I know this because I tried... a few times. The dates have NEVER gone well.

Here's the tale of one date to illustrate my point:

Just under 2 years ago, I had an account on lavalife and had found myself e-chatting to a guy, who's name I no longer remember but lets call him Frank. Frank was from Saskatchewan seemed like a great guy and after just a few emails and a couple phone calls I decided to take him to a football game. At the time the football game seemed like a fabulous idea; we got a game out of the deal and if all else failed there'd be plenty of football action to talk about. BOY was I wrong. The date started off with him giving me really bad directions, as it continued I found out he was agreeing with me about everything. Uhmmm, where'd he leave his personality?? I actually had a bit of fun after I realized this. Overall, it was incredibly painful and after 2 hours when half time finally hit I thanked my bladder for a welcomed break. I went to the washroom and as I'm heading back to the stands, I feel this super strong urge NOT to go back. I think to myself "Leaving would make me a horrible human being, but then again that might be something I'm willing to live with" I call Tara and get her okay and then beat it outta there. PHEW!!!

Afterwards I got an earful from a friend who told me you never do more than coffee for the first date. Which I tried without success.

Being the analytical soul that I am, I've given this a lot of thought. I think that internet dating doesn't work for me because it takes me a long time to warm up to people. It also freaks me out when I feel like someone else has expectations that I'm not ready for and I run... even if I like them! How messed up is that?

If I look back, I tend to fall for people who I've had the opportunity to chat with without a romantic thought of anykind. Those I work with or are unavailable to me in some way are my typical targets.

As I write this, I'm beginning to think I need professional help...

Anyway, the issue is mine and I know this. I'm taking this information and giving the internet one last shot. Plenty of Fish. 3 dates...